What is Your Financial Reality? 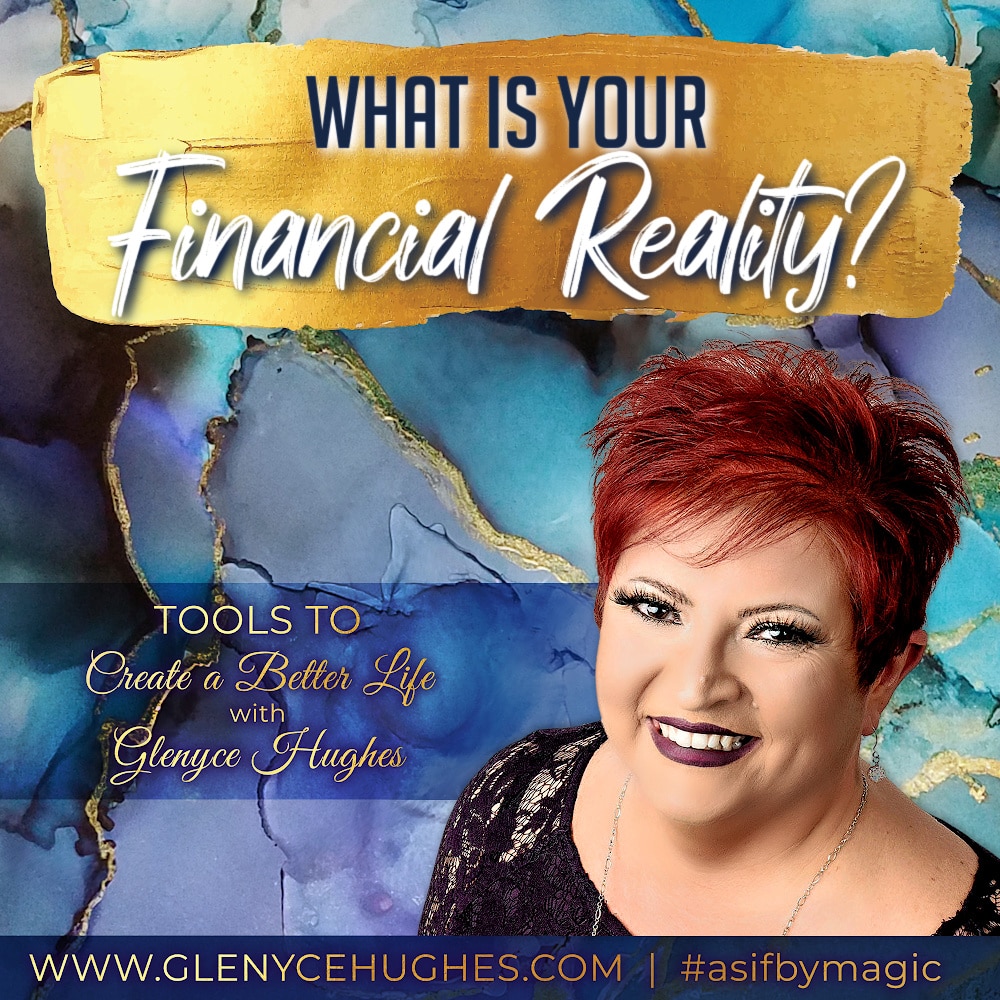 What’s your reality with money?

That sounded yummy to you? Come and play! I’ve got these AWEsomeness coming up for the month of January:

You can also support the radio show by simply Buying Me a Coffee. How does it get any better than that?! I’m excited and would be so grateful to receive a cup of coffee from you, my sweet friend.

[00:00] Hello and welcome to Tools to Create a Better Life with myself, Glenyce Hughes. Thank you so much for being here. I am so incredibly grateful for you.

[00:39] This week’s show: What is your reality with money? Yeah. First off, let’s talk about what the heck that means because a lot of times when we talk about our reality or this reality, it seems a little bit confusing. Like, what the heck does that mean? Don’t we all have the same reality?

[01:29] Recently, I really became aware of this. I’ve been working with a group of people through the book called Living Beyond Distraction which is a book by Gary and Dain from Access Consciousness. It really is all about truly choosing beyond distraction. In it, it talks about how we really want to start acknowledging our differences, and if we don’t, what we end up doing is we use them against ourselves. We’d usually judge ourselves for them [and] we make ourselves wrong for them.

[02:01] What I realized last week when I was working with a person on a project, I was so clear about what was possible, like, so clear. I didn’t even stop for a moment to think that their reality wouldn’t be the same as my reality. Of course, it can be ease, and joy, and glory and of course, it can be done.

[03:35] And so then, when I was willing to be present with that and look at that and go, “Okay, how can i co-create this magic with this person who’s decided it’s not?” It just took me acknowledging that it’s a different world for me in this case, and that theirs is also different and I don’t need to fight it. I can actually just dance with it in a way that will create what I’m asking for what I know was possible. And sure enough, like that — it was possible.

[04:08] It’s just so amazing to me when we’re willing to not give up our reality — not say, “Oh they’re right” but also not go, “Well, they’re wrong” and fight them because that wouldn’t got me anywhere. It really is the sense of allowance and mixed with tenacity of like, “This is occurring.” It might have meant I needed to hire somebody else to do it —that could have been where it got to. [I’m] totally cool with that. Whatever it takes, I knew it was possible. We want to look at that. We talk about that in terms of like, What’s your reality with with money?

[05:40] I know for me, one of the things when I started really playing with that and really just asking with no expectation — just asking — what started showing up was this space of money [being] easy for me.

This one sounds so funny but it’s just—there’s always way more than what I spend. If I go and spend $100, there’s hundreds and hundreds of dollars that either show up or are already there. I mean, I’m trying to give words to something that isn’t really meant to give words to because [of] our realities, our energies… This is one aspect of mine — that there’s just always more than I can spend and never enough, which is this energy of it consistently flowing. That is mine.

[06:35] Now, do I always play there? No. Sometimes, I like to play in other people’s realities about money and be silly and all the things. But as I was asking that — and I probably started, I don’t know, probably a couple of years ago, where I really started asking about it — it changed so much. Once I got that energy, I’m like, “Oh my gosh.” I could like pinpoint, you know, times in my life where there shouldn’t have been money there. There shouldn’t have been [because] I had went and spent it all and [went], “Poor me, poor me.” [I’d] go to my bank account [and I] was like, “What? Where did this come from? What’s going on?” And now, I just get it.

[07:16] Now, can I always track it back to, you know, a source – you know, [that] it came in from this, or I sold this or this occurred? Not all the time. A lot of times, I can, because the other thing that I’m really, really good at is creating money. I’ve got capacities creating money #asifbymagic, totally. Probably you do, too, my sweet friends. You want to look at those things.

[07:40] For me, money would come in – absolutely. But it goes out really quickly, too. That’s the one that I really had to work at. Work isn’t maybe the right word, but really, CHOOSE towards. For me, how I did that was through putting away 10% of what came in. Whatever money came in each month, 10% would go into a separate bank account, kind of like a savings account. But I don’t really like that word, that’s not a fun word for me so I call it my “honoring of me account.” I would take it and I’d put it away and so, it just started building over time.

[07:40] Now, I also have capacities in spending it. What I had to train myself to do, though, like what I really had to take time and choose was to actually HAVE it. That [money] I’ve never had, until about 2014 when I really started looking at that.

[08:52] We have a whole other radio show, I think it’s called The Secret of the 10% Account. I don’t even recall but it was a number of years ago. We’ll have a link somewhere.

And if you’re not familiar, we have show notes now, guys. You can either get onto my e-mail list and you’ll get them e-mailed to you every Sunday when the new radio show comes out. Or, they are on my webpage with each radio show just underneath — you can go and read them there however you would like to, but we have them there. There’ll be in the show notes. You can find the link to that other radio show, too.

[09:27] It’s something I talk a lot about — again, I talk a lot about money in general, and cash, and wealth — because it’s all about receiving. But really, that — the “having money” — is a huge one for many people that we just weren’t ever taught. And so, we get to teach ourselves. You really want to look at what is your reality with money.

[10:07] You know, for me, the “having way more” is always there than what I spend. The other thing when I say that, guys, [is] I’m not a huge spender. I’m not sure that’s totally true — I spend my money on things that I get will create greater and feel really yummy to me. I don’t mean I go and spend, you know, hundreds [and] thousands of dollars a day — I just want to be clear on that. I’ve just got it like, you know, pouring in, because I’m just spending like crazy. I’m very aware of what I’m spending my money on and what it’s going to create, and that’s also been my reality.

[10:47] Now, I didn’t live there. Believe me — I did not live there. I spent all sorts of money all the time and ended up with lots and lots of credit cards, past expenditures, and debt, and all the insanity until I was willing to change that. But that really is something that I’m very aware of — I don’t just spend to spend money, because I’m happy to have money now. That is what I would say would be the difference when I wasn’t comfortable having it. I was spending it on anything and everything and all the things just to get rid of it. Now, I actually love, love, love having money, and cash, and wealth. Yes, that’s been one of the things.

[11:27] Oh, not [as much as traveling!]. For many years, I traveled to different countries all the time and facilitated different classes. I ended up with a lot of cash because people would come and they’d pay for the class in cash. I ended up with it in a lot of different currencies. It was super fun. Now, with the travel stuff for the past couple of years almost, I have not been traveling and there’s not been a lot of in-person stuff so the cash is very different.

Whatever you do, don’t wonder that for yourself, though. Don’t do it — only I can do it. [laughter]

What energy, space, consciousness, choice, magic, miracles, mysteries, and possibilities can us and our bodies be to have money, and wealth, and cash show up as if by magic continuously? Anything that doesn’t allow that, will you destroy and uncreate it all? Right, wrong, good, bad, all-nine, POD, POC, shorts, boys, and beyonds.

[12:35] Awesome! I would love to invite you — I’ve got so many money things coming up, guys Of course, we’ve got the Ultimate Manifest Your Money Goal Toolkit that’s available. We have the How To Become Money Workbook [for] 13 days, and then the Advanced How to Become Money Workbook [for] 9 days. That’s starting [on] January 1st and then after, starting the 14th will be the Advanced. And then of course, the Creating 2022 to Be your Richest Year So Far.

[13:06] So many awesome things, so come and play, guys! I would love, love, love to see you online or maybe in person. I mean, what the heck with that day! Have a great week, sweet friends and I look forward to chatting again next week.

[AUDIO] Is the 10% Account the Secret to Having Money?

Creating 2022 to Be Your Richest Year So Far #asifbymagic