Energetic Tools to Create Magic in Your Business 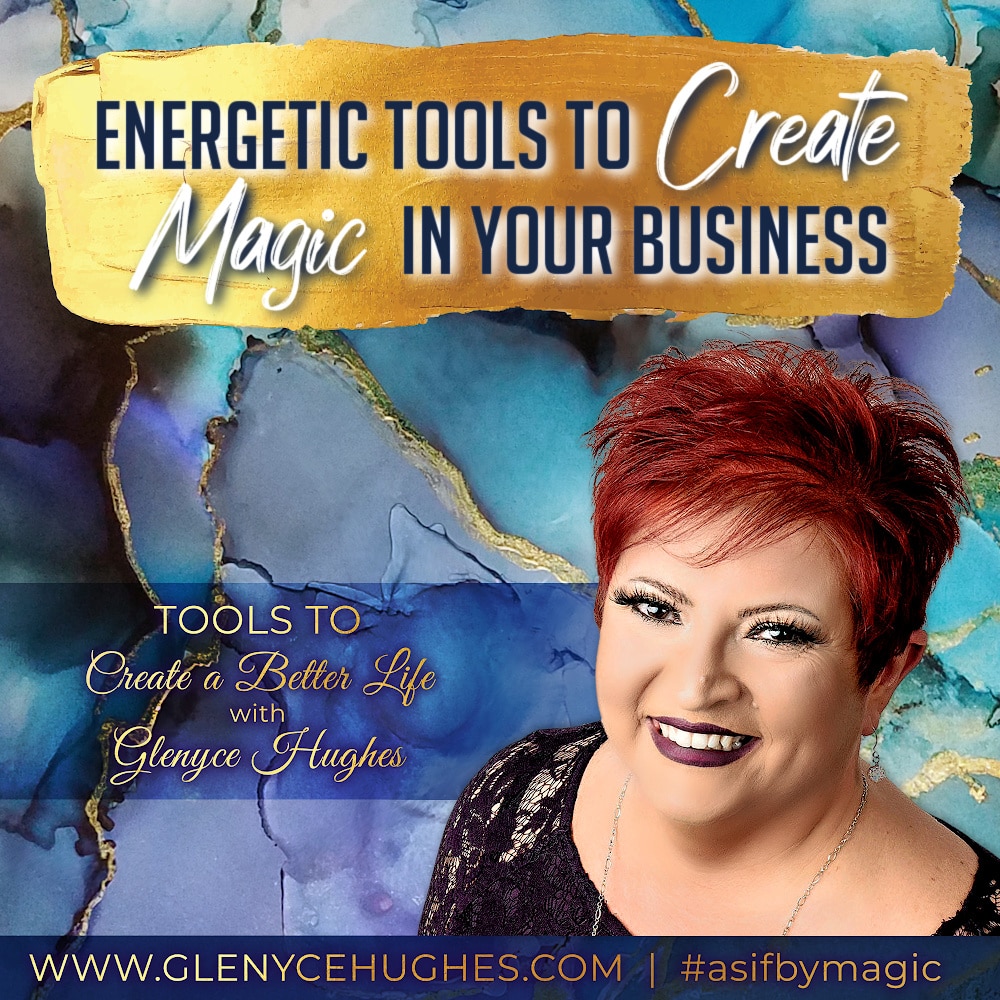 It can be beyond what you’ve imagined possible.

If you’ve been here for a while, you’ll know that business is one of my favorite topics to play with! And so for this episode, I will be sharing some of the tools I use from Access Consciousness when I’m needing a little ✨magic dust✨ in the business, whether I’m launching or upgrading one. Play with it, have fun with it, and see the possibilities it can open up for you and your business!

[00:00:00] Hello and welcome to Tools to Create a Better Life with myself, Glenyce Hughes. Thank you so much for being here. I am so incredibly grateful for you. This week, I am sharing Energetic Tools to Create Magic in Your Business.

[00:00:16] I have been playing in this business for 20 years. Actually, September 2022 will mark my 20th anniversary in this business. I say “this business” because I have done some sort of self-employment since I was a child. I have always had some other business going on. Now, I’ve been employed and always had something else, too. Business is one of my most favorite topics to play with.

[00:00:43] The first tool that I want to talk about is something called a “bell jar.” This is an energetic tool from Access Consciousness®, where you basically put a bell jar over something to keep it separate for whatever.

Now, you can use it in many different ways. The thing that I really want to talk about though, or really want to stress in this is if you’re using it because “you can’t handle it” or “you’re too weak” or “you’re nothing” and whatever it is you’re putting it over as better or bigger than you, that’s a problem. Using a bell jar is never about playing a victim. It’s using a bell jar to give you some space to change whatever it is.

[00:01:23] For example, the way that I used a bell jar — this was so many years ago, probably 17 years ago in my business. There was a gal who was close to me. She lived close to me and she also would play in my business at certain times, helping me out with different things.

She started a similar business and I had so much competition with her in my head. Back then, I wouldn’t have admitted it to anybody because I was horrified at what crazy I had going on in my world about her and her business.

What I came to realize though, was that it actually wasn’t mine. I was in her universe in her world. There was lots of crazy in her world. I was playing with it as though it was mine.

[00:02:10] She said to me — at one point, she said, “I want a business just like yours,” which seemed like a very kind thing to say. I actually asked Gary Douglas, the founder of Access Consciousness®, about it when I was in a class with him. This was back in 2013. I asked him about it because it stayed with me. There was something about it that I just kept going back to, in my mind, the comment that she’d made. He said, “So, does she want a business just like yours, or does she want your business?”

I was like, oh my gosh, she actually wants my business! This really was this intense and crazy and bizarre mess of “I’m wrong and I’m competitive” and then, “Well, she’s wrong and she’s…” like, it was crazy.

[00:02:56] What I chose to do was I actually used a bell jar. So, I put a bell jar on her. This wasn’t a bell jar on her life, her living, any of that. But it was a bell jar on her with regards to me, until I could get stronger in who I was at the time, and recognizing that there’s room for all of us and I wasn’t playing with her crazy and all the insanity that was going on, just to give myself that space. Once I got there — once I got to all of that crazy being gone, I just changed the bell jar.

[00:03:33] It’s one of the ways — I look at that as a great example because I’m not sure what I would have chose had I continued to play in that competition, crazy, she’s wrong, I’m wrong, we’re both wrong – all of that insanity, because that energy is a very heavy, heavy energy and a very icky energy.

By using the bell jar, I was able to change it into getting the confidence in myself, getting the space for myself and then, being able to carry on. Whatever she was going to choose once that bell jar was gone, it was irrelevant because I had me. I was confident in me. This was a huge, huge gift.

Again, if you’re using it because you’re a victim to somebody or to a situation, don’t use it. But if it’s just to find your feet or to get that space for you, then it’s a magical tool that can create so much more.

What energy, space, consciousness, choice, magic, miracles, mysteries, and possibilities can me and my body be to be out of control, out of definition, out of limitation, out of form, structure, significance, out of linearities, and out of concentricities for all eternity? Anything that doesn’t allow that to show up as if by magic will you destroy and uncreate it all? Right, wrong, good, bad, all 9, POD, POC, shorts, boys and beyonds®.

If you’re not familiar, that is the Clearing Statement from Access Consciousness®. You can go to www.theclearingstatement.com for more information about how it works. It’s a magic wand, my sweet friends. It’s amazing.

[00:06:07] Another magic trick that I use is what I just call an “energetic exercise” basically, and it’s different for each one of us. I’m going to show you how I do it. However, you’ve got to play with it and find the way that works for you.

[00:06:47] Let’s do one together right now: Imagine something that you would like in your business today. Imagine that you have a class or you have a product you’re selling — something that you would like someone to come and purchase. Okay? We’re just going to get the energy of the thing. Whether it’s a class or a product or something, get the energy of that. And now, we’re going to ask it to contribute. Yeah.

Again, this is just an energy thing. Don’t worry if you’re doing it right or wrong, don’t get caught up in that. Just know that as we’re doing it, as I’m saying it, you’re doing it. You’re playing with us here.

[00:07:21] We’ve got the energy of it, we’re asking it to contribute, and now we’re going to drop any barriers that we might have. I just use these words:

Just imagine dropping them all. So, I’m the oneness I truly be with the thing, with myself, with oneness, and then I’m just energetically asking and pulling to the thing.

I’m going to use a class for myself right now. I’m energetically pulling to it anybody who doesn’t even know they’re looking for it. We don’t have to figure out who that is. We don’t have to just do one person. All the people who don’t even know they’re looking for it, and I’m just energetically pulling them to it. Again, I’m asking the class to contribute to pull them in, also. And then, we just let it go.

We don’t keep doing it. We don’t force it. We don’t make it happen. We don’t go check our email to see if somebody bought it. We just do the energetic exercise, and then we let it go.

[00:08:27] I also have a gift for you of Questions to Ask your Business Every Day for Success. If you would like those, you can find the link above or below. If you don’t see a link, then you can reach out and I will send it to you so you can grab those.

You can use it on individual things like, you know, a class or certain products or things like that, or the business as a whole. Maybe your bank accounts. I mean, truly, there is no limit what you can do with this energetic tool, guys. Play with it. Have fun with it.

Those are just a few of the energetic tools that I use to play with my business to create way more magic in the business.

[AUDIO] I Blew Up My Business!