Tools to Change Anything 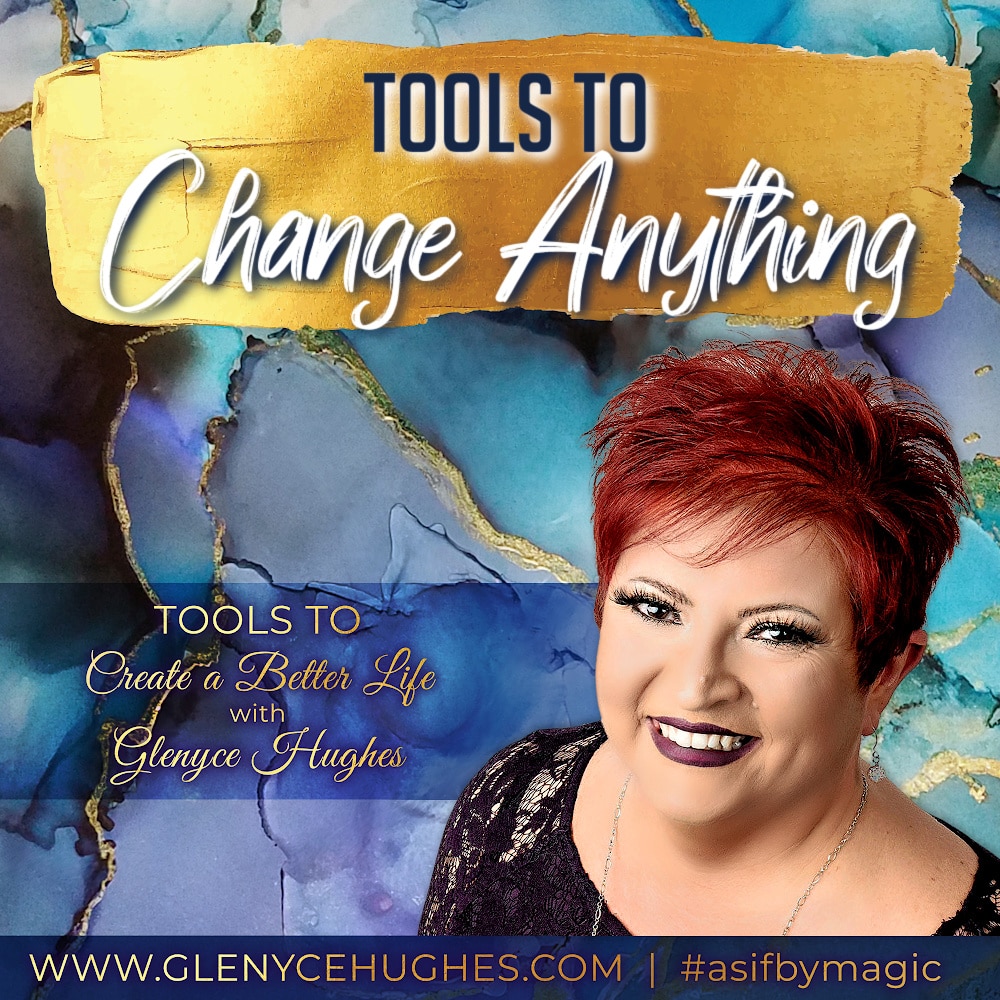 If you’ve been wanting to change something in your life, this episode is for you. Listen in as I share some amazing and easy-to-use tools from Access Consciousness that you can utilize to get you out of the problem and into the space and lightness to change anything as if by magic.

[00:00] Hello and welcome to Tools to Create a Better Life with myself, Glenyce Hughes. I am so incredibly grateful that you are here, whether you’re watching this as a video or listening to it as an audio.

This has been almost two years that we’ve been doing this and yet, every once in a while, I still want people to know that there’s lots of ways to consume this weekly show, podcast, or radio show—whatever you might want to call it. We’ve got YouTube, Facebook and Instagram, and—oh my gosh—all the things and then, of course, all of the podcast apps like Spotify, Apple, and all the other ones that I don’t know.

You can access this anywhere—you can search “Tools to Create a Better Life.” You could probably even search my name, if you can figure out how to spell it and find it that way.

[00:50] What are we going to talk about this week? Well, I am in the midst of facilitating yet another phenomenal Foundation class, which is one of the classes from Access Consciousness. If you’re not familiar, you can go to www.accessconsciousness.com for more information about all the amazing classes. It’s really where all of the tools that I share on this radio show are from—they are life changing and amazing.

[01:14] So, Tools to Change Anything. Yep—anything, because that’s what these tools do. You can actually utilize these tools to change anything.

[01:28] You hear me share them in all sorts of ways—maybe you’ve been following me a bit on Instagram and my reels or on TikTok lately where I’ve been sharing magical money tricks which you can use on anything. One, you can go opt in and get the FREE downloads: I did a video, there’s a PDF with five questions, and there’s phone wallpaper with my #1 question for more money. You can go grab that—that’s a gift for you. Basically, these tools can be used on anything.

How do you use this? Before I go into this, even if you’ve been here for a while, even if you’ve used this tool a million times, take a moment and listen. I know what you’re like because I’m like that, too. [You’re] like, “I know how to use that!” and then, you stop paying attention. But let’s all just be present for a moment… okay, there we go.

[04:15] Bring that up, think about it and repeat that over and over and over, and allow yourself the space to change it. All you’re doing is identifying it’s just a point of view, which means it’s not real, it’s not significant,  it’s not black and white. It’s just an interesting point of view. You do that enough times [and] it no longer has a hold over you. Now, you have more space to make a different choice.

Whatever the problem is, whatever the thing is that isn’t working, whatever it is that you would like to change, add interesting point of view to it.

[04:54] Let’s say it’s something that occurred last week. You’re not in that moment, you’re remembering it. You’re reliving it, possibly. Maybe you’re having—maybe this is just me, pretty sure it’s not, though—of like where you’re replaying it in your head. “I should have said this, I shouldn’t have said that”—like that insanity.

[05:38] I said this already [and] I’m going to repeat it again, though. You do not have to say this out loud. In fact, if you’re saying it to somebody, you’re probably being a superior bitch and stop it. Stop it. A lot of times, people find these tools and they start using them. But then, they start basically killing everyone around them with them. That’s not what these tools are for. Just for you, just for fun, never tell anyone.

[06:21] That is one tool, and you hear me talk about it all the time if you’ve been around a while. If you’re new here, hi! [It’s] nice to meet you. Otherwise, it’s just one of those that can change anything so quickly in my experience.

So simple, my sweet friends, so simple. For me, it changes it very, very quickly. So, that’s one tool to change anything.

[07:16] Another tool, and I haven’t probably shared this all that much. It’s not one that I’ve really used a whole lot. But I was talking about it in the Foundation class this morning which is just popping into my mind now.

[07:27] Let’s say you’re in a situation that you would like to be different—you’re frustrated with it, you’re upset with it, it’s not what you’d like it to be. A question you can ask: What is funny about this that I’m not getting?

Yeah, right? It just changes it. [It’s] because there’s always something funny about it. If you’re stuck in the drama-trauma of the thing, then you’re in a very solid, heavy, icky energy. But by asking What’s funny about this that I’m not getting?, there’s that lightness.

[08:23] The other way—different sort of a question, but very same idea. What’s right about this I’m not getting? Same idea, just a different energy to it.

[08:34] I know a lot of people when they hear that, they [would go], “No! If we’re choosing consciousness, we don’t do right and wrong so I can’t ask that question.” You can, but you just want to recognize we’re not asking from the place of what’s right about this so we can figure out what’s right—not from that.

[09:06] It just depends. What’s funny about this (I really like that one) and what’s right about this, either one of those will change any situation because again, when there’s contraction, once we change it to lightness, that’s where the awarenesses, that’s where the possibilities is, and that is where the magic is.

[10:01] It changes it because we’re not taking our time to figure out all the interesting points of views we’re playing with. We’re just saying, “Hey, if I didn’t hold on to any of this, what magic could I be? What magic could I create?” which then, guess what? We go from the heavy contraction to the lightness which is what we’re looking for. The stuff that’s going to change it for us is getting into that lightness, and whatever it takes to get there.

[10:28] This is just one really quick way around it, really quick acknowledgement that we are the creators of our life. A lot of times when we’re in that icky-ness, when we’re in the problem, drama, etc, we’re playing a victim. We’re going, “Well, I will change this, but that person won’t let me” or “This wouldn’t be happening if they didn’t do this” or “If the government wasn’t that…”

If I didn’t have a point of view here, what magic could I be?

[10:56] It changes everything. With questions, we’re not looking for answers. When I asked that, I’m not going, “Okay, so what magic could I be? Let me figure out the magic I could be.” It’s not gonna work like that. It’s just asking that question, we’re gonna go to the lightness, and then the universe is going to deliver the magic. Okay? Our job is just to ask the question, be the question, be the lightness, change anything that isn’t light into lightness, and the universe will do the rest.

[11:27] Another tool to change anything is to always be in the question of yourself of what would I like to create here?

[12:13] Again, let’s go to the example of you’re driving to work and you’re upset about the traffic. It’s really heavy traffic and you’re late already. You’re in that place of “this is so stupid and I shouldn’t have to deal with his traffic” and “I hate traffic and I left early so I didn’t have to” and all that stuff. That energy is not going to change anything.

However, [try] asking what would I like to create here? It’s often the exact opposite of what you’re creating. It’s often like, “I’d like to have ease with the traffic. I’d like to get to my appointment on time” and that’s all you need to do—turn it into what you’d like to create and then ask for that. The way that I asked sounds a little bit different than an ask, but it’s still an ask.

[Those are] some really simple, easy-to-use tools, my sweet friends, to get you out of the problem and into the space [and] the lightness to change it as if by magic.

[13:45] Depending on when you’re watching this, sweet friends, I would love to invite you to the Projections, Expectations, Separations, Judgments, Rejections Book Club that I have starting on March 8, 2022.

Of course, if you’re listening later, you can always access the recordings and stuff—[the] link will be the same. You’ll find that link somewhere [and] if you can’t find it, let me know.

[14:06] Pool Party Bars and Foundation [is] in July of 2022—come and play! Bring your swimsuit and just so you know, the class is not in the pool. I’m sorry for those of you who would like that, but it is not. The class is in the class space and then before class, at lunch break, and after class, the pool is open for your use. Just for anybody who thinks that we’re having class in the pool, we are not. How does it get any better?

[14:35] [I’d] also love to invite you to come and chat with me. You guys hear all sorts of stories about me. You probably know me quite well based on what I share in all my content and my classes and everything. And [so], I’ve opened up a weekly Zoom where I chat with you. Anybody who would like to, you’ll find the link. You can opt in and you’ll get the email.

We just hop on Zoom for five to seven minutes and you just tell me about you. I’ve got some really fun questions to ask you just so that I can start to get to know who you are because I missed that. I really, really missed that.

Anyway, have a fabulous week sweet friends and I look forward to chatting again next week

[VIDEO] Change Anything with Ease

[AUDIO] Gratitude: The Key to the Change You Have Been Asking For

[AUDIO] What to do When Things Don’t Change

[AUDIO] A Question that Can Change Anything