Tools When You Are Scared AF 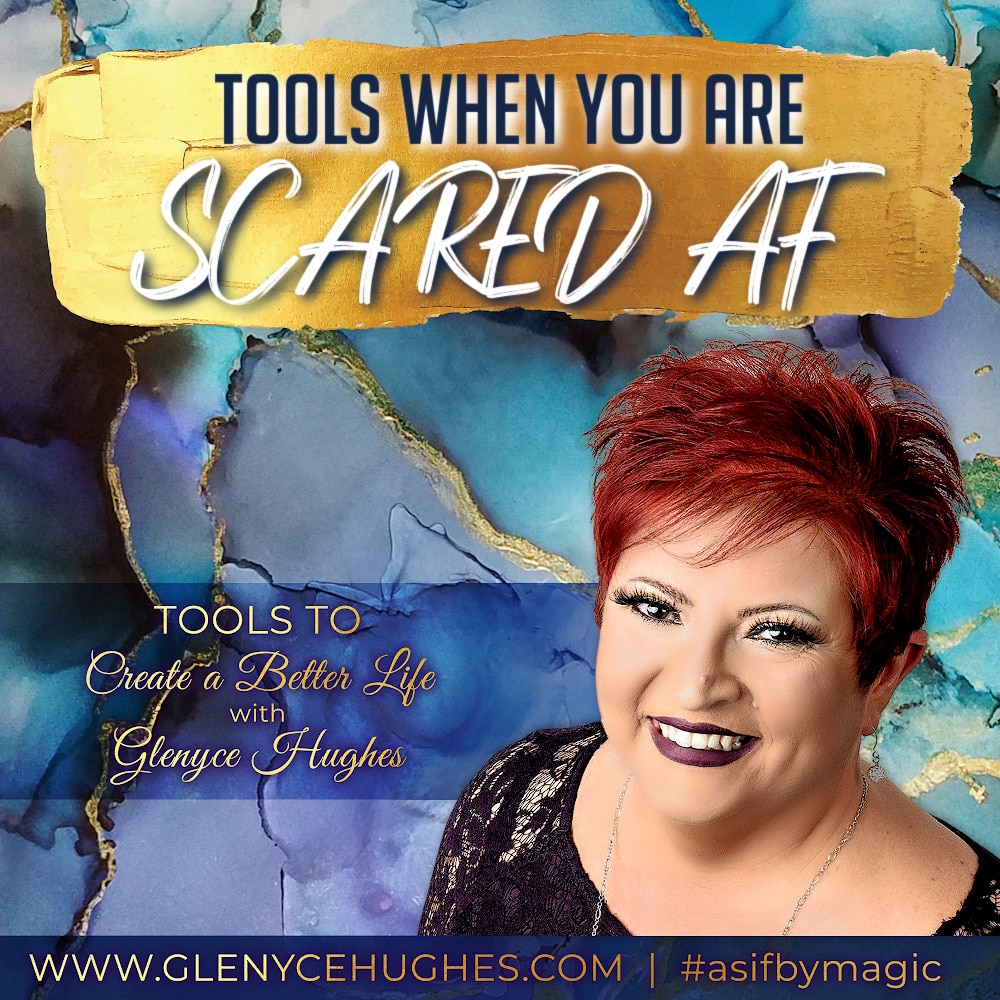 Still spinning in that fear, crazy, scared-as-f*ck energy? Tune in to this episode ‘cause we’re listing down more magical tools from Access Consciousness® to assist us so we could start changing all that energy for ourselves. How does it get any better than that?! ✨

[00:00] Hello and welcome to Tools to Create a Better Life with myself, Glenyce Hughes. Thank you so much for being here. I am so incredibly grateful for each and every one of you.

[00:11] Tools When You Are Scared As Fuck. Something that you want to recognize with that scared energy or that fearful energy is you have a couple of questions you can ask yourself. First question: Truth, is this fear or is this excitement? Now, let me explain. I know that sounds weird. However, a lot of times what we’re calling fear is actually our body super excited about something.

[00:43] Let me give you an example: Years and years ago, I wanted to be a public speaker. I wanted to stand on stage and share inspiration with people. And then, I got my first invite—I was invited to speak on stage. “Oh, no, I can’t have that! I’m scared, I can’t do it! I have to say no!” – I had all of this insanity going on.

[01:08] Now, I didn’t have this tool back then. Luckily, I didn’t let it stop me. However, the question I could have asked myself back then is like, Truth, am I fearful, am I scared, or am I excited? Because in that situation, it was actually what was true. I was so excited—my body was so excited—but we’re so used to identifying that energy as fear that we don’t stop and ask a question.

[01:34] Please, my sweet friends, start asking Is this fear or is this excitement? If you get that it’s fear, don’t worry, I have another tool for you. When it reads as fear—it’s not excitement, it’s actually fear. What we’re doing is we’re distracting ourselves.

[01:52] To give you a silly example: if you’re walking in a city downtown late at night, and you’re walking around and you’re feeling icky that you just go, “Oh no, I’m just distracting myself. I shall continue to do whatever I would like!” No.

You actually want to look at [if] there is something else to choose. It could be that you’re distracting yourself and you could make a different choice. Maybe you get a taxi in that situation or something different. So, it’s not that we go, “Oh well, it’s no big deal.” We still pay attention to it, but we don’t distract ourselves with it.

[02:45] Let’s say you’re—what is that term now? Doomscrolling, I think? They call it [that] when you’re on social media or something, looking at all the, you know, “This is the worst thing ever and we’re all gonna die!” and all of that. Maybe the choice in that moment would be to stop doing that. That could be that, but you can check in [if there is] an action to take.

Maybe you are aware of something and there’s something to actually do. But it’s not ever about sitting in your house by yourself feeling scared as fuck. That’s never going to create greater — that’s only going to create more distraction and more of that icky energy.

[03:24] We really have to look at this, guys, because it’s something that we’ve probably found a way to just deal with. It’s like, “Oh well, that’s just what happens. I watch the news, and then I can’t fall asleep at night. And then, I wake up in the middle of the night and I worry some more” – we’ve got to stop that one. It adds the same energy—gives us more of THAT energy, of that doom-y, gloomy, icky energy.

[03:48] It’s not about putting on rose-colored glasses, either. We’re not going, “Oh, no. Everything in the world is perfect. Everybody’s happy and loves each other!” Please don’t do that. It’s about being aware. When we’re distracting ourselves, we’re not aware because we’re doing what I call “putting blinders on.”

[04:08] Let’s say you go on social media for a little bit. You see some stories and it’s like, “Oh my gosh! Okay, well, this is gonna happen and this is gonna happen, and then we’re all gonna die! This is gonna happen when we’re dead!” and you know, all that. We’re putting all these blinders on rather than going, “Okay, yeah. I’m willing to be aware of what’s going on without adding a story to it, so that we can actually start to be way more aware of what’s required to change it. What can we be and do different to change it? Such a powerful question, my sweet friends. Such a powerful question.

[04:43] I also have another radio show from years and years ago all about fear. We’ll link to that in the radio show notes.

If you’re not on my e-mail list, guys, get on my e-mail list! You get the show notes e-mailed to you and the show e-mailed to you every Sunday along with a bunch of other fun stuff on there in the show notes. Ericka, the magician in the business, goes through and transcribes everything I say, puts it all in there with links to things I talk about and all the things. So, come and join us!

[05:09] The other thing I would like to invite you to is—I’m laughing because of the title—I’ve got some Clarity Nights, I mean Afternoons coming up. In Access Consciousness®, we have this possibility of doing what’s called Clarity Nights. We would maybe get together in the evening, and we would talk about a topic and do a bunch of clearings and just get clarity around it. However, I’m going to have them in the afternoon. It’s just a fun play on it.

There’s 5 (five) for sure coming up. I may continue them after this, but we’ve got things like being The Most Valuable Product in your life, Choosing #asifbymagic, and a bunch more that I don’t recall right now. We’re just going to talk about them.

If you are in the area, if you are my neighbor, please come and play in person with me, my sweet friends. We’ll have them both online and in person at the same time. If you’re here, you can come play. If you’re not, you can join us online. You’ll find the link somewhere [and] if you can’t see it, reach out and I’ll get it to you.

[06:10] Back to the show! Okay, those are the two questions: One, is this fear or is this excitement? Now, that’s gonna read for some things, and for some other things: Am I distracting myself with this? If you get a yes, What other choice do I have?

Again, it might be to take some action. You might be recognizing that what you’re choosing in that moment isn’t creating greater and there’s a different action to take—cool. And then, it can be what can I be and do different to change this?

[06:39] The other thing with this: we want to recognize, again, especially because of everything going on in the planet, one of the other tools that we use all the time—I was gonna say a lot, but that’s not true; all the time—in Access Consciousness is Who does this belong to?

[07:13] What we want to do, again: Is this fear or excitement? If you get its fear, then What am I distracting myself from? and also Who does this belong to? It’s going to lighten up… Return to Sender with consciousness attached – that’s the tool.

[08:20] The more that I change that energy that shows up in my life—that scared as fuck, the more that I’m willing to use these tools, it energetically ripples out and invites people around me and for miles and miles and forever and ever and ever to change it for themselves. So, what sort of contribution could we be if all of you listening start using these tools rather than playing with scared as fuck as though it’s real?

[08:48] We’re infinite beings. Scared isn’t a reality for us. We are infinite beings with infinite awareness, so we would make a different choice. We would just know—”Oh, there’s that energy. Okay, what can I be and do different to change this?”

But when we’re pretending we’re finite beings, that’s when it becomes a bit of a problem. That’s when we stick ourselves because we go into this energy of like, “Oh, I’m scared because of this and it’s because of this, and this is going to happen and this is going to happen” and then, it’s that spiral. It was called like that, you know, hamster on a hamster wheel, like you’re just going, going, going, and crazy, crazy, crazy. Honestly, it’s up to us to stop it.

[09:25] You’ve got some tools now, guys. Please if you’ve got any questions, let me know. You can post them below depending if you’re watching this video somewhere. If you’re listening on the podcast, then you can email them in info@glenycehughes.com, or just go to my webpage www.glenycehughes.com and you’ll see the Contact page. Send them in [and] I’m happy to do a follow-up show with any of these, guys, because this—let’s change this, my sweet friends. Let’s change this.

[AUDIO] The Truth About Fear