Tools to Need and Tug 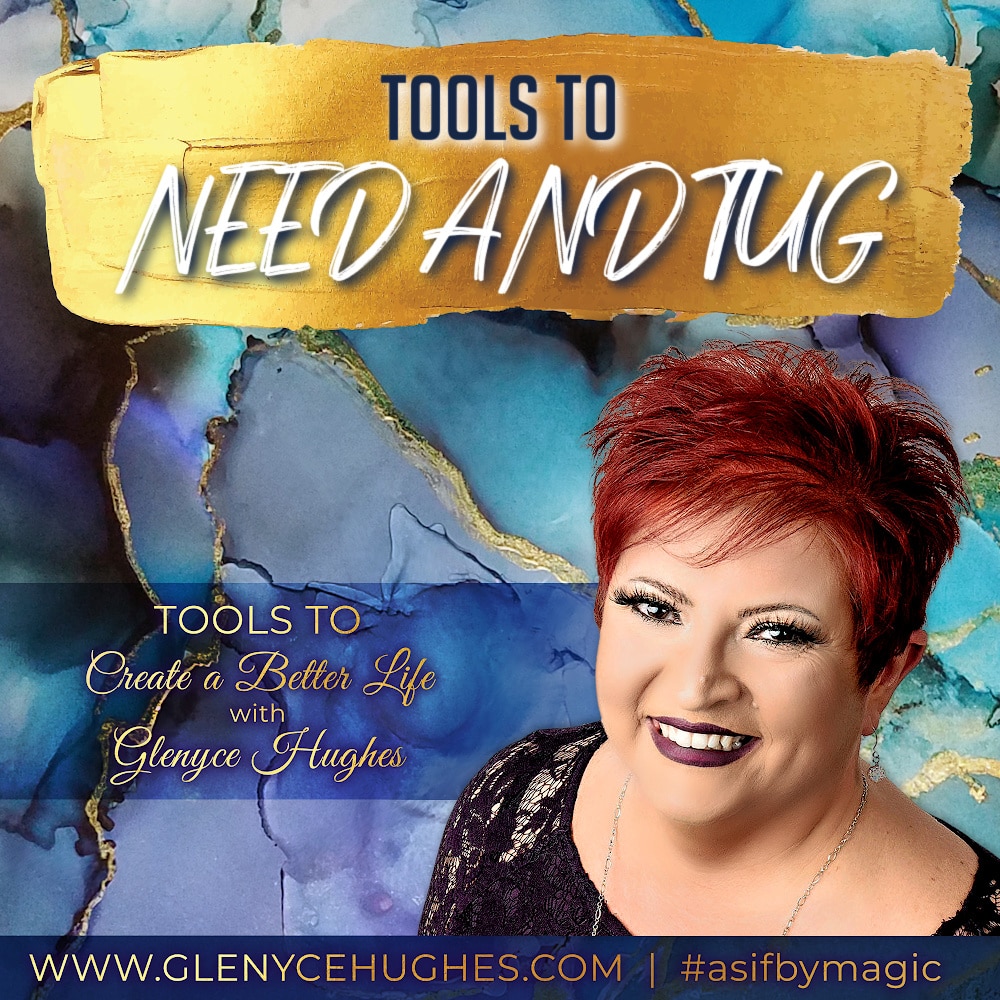 Tug your desires TO you.

A lot of people believe that if you need something – if you desire it, then you must be forceful and have to have it now. In reality, all that does is push it away. What if you just need… and tug? In this episode, we will discuss all about “need and tug,” and the phenomenal tools from Access Consciousness that you can use to tug everything you desire to you.

[00:00:00] Hello, and welcome to Tools to Create a Better Life with myself, Glenyce Hughes. Thank you so much for being here. I am so incredibly grateful for each and every one of you.

That “need and tug” is actually from Access Consciousness®. If you’re not familiar, www.accessconsciousness.com is a great place to start exploring.

Does that give you any ideas, my sweet friends? Yes. What if you could take it to everything? Like really, if you were desiring a lover that really contributed to your body, you could tug that in, too. I mean, there’s nothing that you can’t and don’t already tug in.

[00:01:58] This is the thing with need and tug. You are already tugging to you everything. It’s just that most times, you’re putting your energy on drama-trauma and tugging more of that in. Problems? [You’re] tugging more of those in.

[00:02:16] It’s really about you starting to get aware of what you would actually like to create, or have, or be, or do on the planet. The more that you’re aware of it – the more that you play with it energetically, the more ease it’s gonna be to tug it in. Yeah.

[00:02:38] Tool number one is you want to have no significance. No point of view about what you’re asking for.

This is a big one for a lot of people because there’s this space of if you would like it – if you’re needing it, if you’re desiring it, then you must be forceful and have to have it now, but all that does is push it away. Yeah, yeah.

What if we could create our lives like that? What if that was the space of possibilities for our lives? Yeah.

[00:03:30] That is really tool number one: is look at the things that you’ve decided that you need, or would like, or desire, whatever word you would like to use, and get rid of the significance of it. Get the lightness of it. If you can’t, then that’s gonna give you some information.

What you could ask in those situations is “What’s the value of making this more significant than me?” What that will start to do is allow you to recognize that you are the only thing that is significant in your life and living. That’s it.

[00:04:03] If you put that significance on—let’s say you’re asking for money or a new house or a new lover or whatever—you’re giving your power away in those situations. It’s really about you and you acknowledging your value in your life and how everything else can be like icing on the cake or like a sandcastle.

That is tool number one: you want to really find the lightness, get rid of the significance, and look at it as though you’re playing with sand castles on the beach.

[00:04:34] Now, tool number two I’ve actually talked a little bit about already, and it’s really about getting the energy of what you were asking for. What is it you would like? What is that energy? Just get the energy of it.

Let’s do it together right now. Just look at something or an energy you would like, a new lover, new house, money, whatever it is. Just get the energy. The way that I like to word it is What would your life and living be like if you had that? Yeah. That often just gives me the energy.

[00:05:10] Lately, I’ve been asking for ease, and joy, and glory. That’s what I’ve been asking for. ‘Cause you see, often what we do is we ask for the thing, and I actually did a radio show not that long ago about this. I don’t even recall the title, but we will link to it. We’ll find it. It’ll be in the show notes which you can find on my webpage or if you’re on my email list, they get delivered to you every Sunday.

When I look at that and I go, “Okay, what would my life and living be like if every moment was ease, and joy, and glory?” I don’t even have to say much words. It’s already there. It’s like, “Oh, yeah. That.”

[00:06:00] Like the guy in the book, I have the energy of what it’s like to have gold. I have that. I have that energy. It’s like, “Yeah, I know what that’s like. Okay, cool.” Basically, what I do is I just tug that in. All the people, all the places, all the experiences, everything that’s gonna contribute that to my life, I energetically tug it in. Yeah.

[00:06:26] In fact, last week, I did a call—an energetic exercise with a group of people, whatever we wanna call it. It was called Tug Your Ask. Guys, if you weren’t part of that, there’ll be a link somewhere above or below.

It was about 15 minutes, I think? The energetic exercise itself? I did some talkings before we started, then I did the energetic exercise. I spliced it out so you can use it over and over. The feedback that I have been getting is phenomenal. Check that out if you would like. But basically, you’re doing that. You’re getting the energy of your ask and then you’re tugging it in.

[00:07:02] Now, I would love to invite you to an upcoming 3-part series. It is called Actualization in Business which is need and tug in business. It’s just that energy – need and tug is like actualization. We’re gonna do it over three parts because there’s a lot to this. There’s a lot of points of views to clear first to be able to get to where we’re going.

Join us. Again, link is above or below or somewhere. If you can’t find it, reach out and I will get it to you.

[00:07:34] Tool number three is actually a question. I listen to a call series with Gary Douglas from Access Consciousness® about need and tug, and he said this question. I actually put it on my Reminder app. It pops up every morning for me to ask this. I want to read it for you guys:

[00:08:00] Like every question and Access Consciousness®, we’re not looking for an answer. You’re just gonna ask that question. Yeah. And then, you’re just gonna allow whatever that is. Whatever it is. How I kind of end it is I say:

Anything that doesn’t allow me to perceive, know, be, receive, and tug it now, I destroy and uncreate it all. Right, wrong, good, bad, all-9, POD, POC, shorts, boys, POVADs, and beyonds.

…which is the Access Consciousness® Clearing Statement. If you’re not familiar, go to www.theclearingstatement.com for more information about how it works. It’s like a magic wand. It’s amazing, my sweet friends. If you know nothing about it, and if you know everything about it, go to that page. There’s always more to learn.

[00:08:46] The other thing that I wanna talk about for a moment, for some of you, you’ve attended Foundation and you know that we don’t use the word “need” very often. In fact, it’s one that we’re suggested not to use because of the significance of it. If you need something, then you can’t live without it. There’s all that energy.

Just know that the word “need,” in this case a need and tug, is actually more like “desire.” Like, you desire it and you’re tugging it in. Remember the energy of building sandcastles and not having a point of view of what happens to them? That’s the way we’re speaking of need and tug in this experience. With need and tug, it’s more like desire and tug.

[00:09:28] Thank you so much for being here, guys. I am so incredibly grateful and I look forward to chatting again next week.

[AUDIO] Tools for Clarity with What to Ask For

Tugging Your Asks to You