Tools for Clarity with What to Ask For 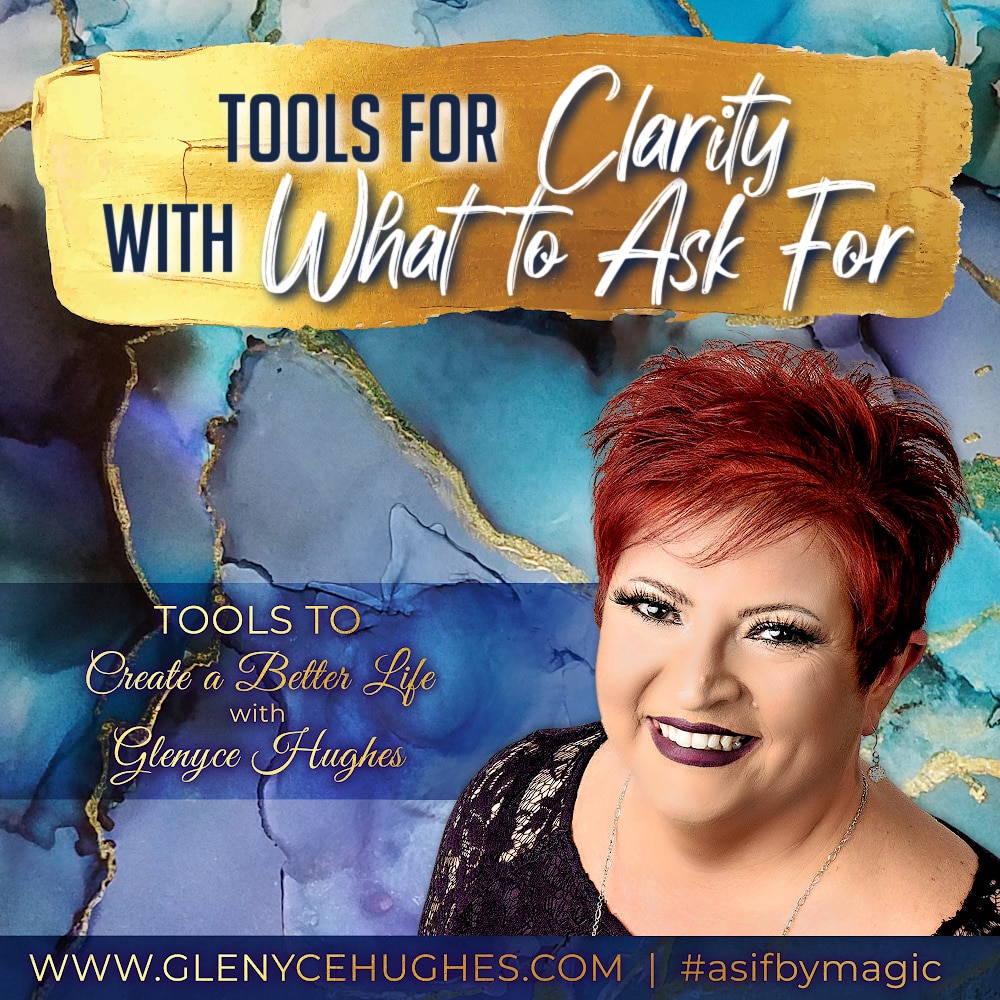 Truly, what are you asking for?

Struggling with your “asks” not showing up? Is it taking waaaay too long to actualize? You might want to start checking on that – it might actually be a “conclusion” instead of an “ask.” If you want to know more, tune in to this episode because I will be sharing another set of phenomenal tools from Access Consciousness® to help you get clear with what you’re asking for, and start allowing the magic to show up!

[00:00:00] Hello and welcome to Tools to Create a Better Life with myself, Glenyce Hughes. I am so incredibly grateful that you are here however you’re watching this. It’s on YouTube, it’s on Facebook, it’s on TikTok, it’s on Instagram. It’s everywhere it can be, so welcome. Oh, and it’s even a podcast! That’s how it initially started, and then here we are. So, how does it get any better than that?

This was inspired by something that I became aware of when I was on a free Zoom with Kalpana. She is coming to Calgary, Alberta, Canada, to do a 3-day body process class. I’m so excited! I’m on our hosting team. Come and play with us, guys. I’ll have the link above or below somewhere. We’d love to have you.

[00:01:01] I was discussing with her on this call about the weight for myself and how I had this target of weighing less than 200 pounds by the time I was 50. I turned 50 on August 23, 2022. In these years that I’ve changed my body so much and weight loss and all of that, it’s just been so magical and that’s been a target.

[00:01:31] However, it was so interesting when I chatted with her about it because I was using the word “target”, but it wasn’t actually that energy. It was really about basically judging myself and pushing and forcing, and there was no kindness in it whatsoever. There was no space in it. It was really, really ick, and I didn’t recognize that until I was discussing it with her on the call.

[00:02:00] And then, she said something so… oh my God. Something I’ve said to other people, so like it’s so “Of course!” Anyway, what she said is, “What if you’re—” and she didn’t use the word “target”, but “What if you actually just chose to be so ridiculously and outrageously happy?”

What? What!? And so, what I recognized I’d been doing is that I was asking for the conclusion.

[00:02:37] Now, you guys, I have talked about this in so many of the classes that I facilitate. I have done other radio shows on it, all the things. But it took me having that conversation with Kalpana to really recognize that I actually was doing that. I was asking for the conclusion.

My conclusion was if I weighed less than 200 pounds by the time I turned 50, I would be outrageously happy. I mean, those wouldn’t be my exact words, but that was the energy of it. But what was I asking for? The conclusion, the “because,” so to speak.

[00:03:15] So, tools for clarity of what to ask for is to look at what you’re asking for. Whether you call them “targets” or “asks” or “goals” or whatever it is, look at them and ask yourself and be super honest:

“If I have this…” if I create this, if I actualize it, whatever the proper word would be, “…what would I have? What would I be?” ‘Cause you want to take it a step further.

[00:03:43] Now, some of those things, there will be nothing else, and that’s actually the ask. However, if I would have asked myself if I weighed less than 200 pounds by the time I turned 50, then what? I’d be so happy. I’d be so proud. I would be just over the moon, thrilled with the choices that I’d made. That’s the ask. That’s the ask. It has nothing to do with the number on the scale.

Oh God. I’m so grateful for that conversation because then, I started looking at all the other areas of my life where I’ve been asking for the conclusion.

If I have this, then what? I would be happy. I would be peaceful. I would be over the moon, joyful, whatever it is, then that’s what you’re asking for.

[00:04:50] What happens is the universe cannot contribute to us when we’re asking for a conclusion. I mean, it doesn’t like it doesn’t cut off all contribution. I don’t mean that. It’s just there’s not a lot of space in that.

“I could go on a vacation.”

[00:06:42] Asking for the conclusion really just cuts the universe off at the knees. It really limits what’s actually possible.

Everything that just brought up, will you destroy and uncreate it all times a godzillion? Right, wrong, good, bad, all-9, POD, POC, shorts, boys, POVADs, and beyonds.®

With some asks or targets or things where we’re maybe, I don’t know, struggling with or frustrated with that aren’t happening, those might be really great places to ask those questions or really get present with.

[00:07:34] One thing I know about myself, and you’re probably very similar, is that what we really desire, we actualize. We really do it, like, if you’re still asking for something a year later and it hasn’t shown up, it’s possible—probably very likely—it’s a conclusion.

The other thing it can be, of course, is it’s maybe not your ask or maybe it was your ask and it’s changed, but you haven’t acknowledged that. You really want to recognize that, too.

[00:08:01] Using these tools will really start to allow you to get super clear in what you’re asking for, and then the universe can contribute. Of course, you are a part of the universe. I don’t mean it’s this big energy outside of you. That’s when the magic can show up.

[00:08:19] Outrageously happy – that has already changed so many things in my life and my living. It was, I don’t know, maybe a week ago if even that, since I had that conversation with Kalpana. How does it get any more magical than that, my sweet friends? Truly, what are you asking for?

What am I refusing to ask for that if I would ask for it, would show up as if by magic? Everything that doesn’t allow that, will you destroy and uncreate it all? Right, wrong, good, bad, all-9, POD, POC, shorts, boys, POVADs, and beyonds.®

[00:09:01] A couple of things that I would love to invite you to, my sweet friends, is the Business Done Different class I’m offering in June. Oh my gosh! [It’s] my first one, so excited. The manual itself is worth the price of the class, let me just say that.

[00:09:14] I also have a new class, a new 3-part class coming up. I don’t have the official title yet. I’m just in the process with getting it approved by Access, but it’s all about need and tug in business. Yes. Yes.

The link will be above or below. Again, if you don’t see it, reach out. I would love to have you come and play, guys. I’m so, so, so grateful for what we can actualize on this planet. Truly, what else is possible that we’ve never even considered?

[AUDIO] Tools to Ask and Receive