Tools When You Don’t See the Fucking Point Anymore 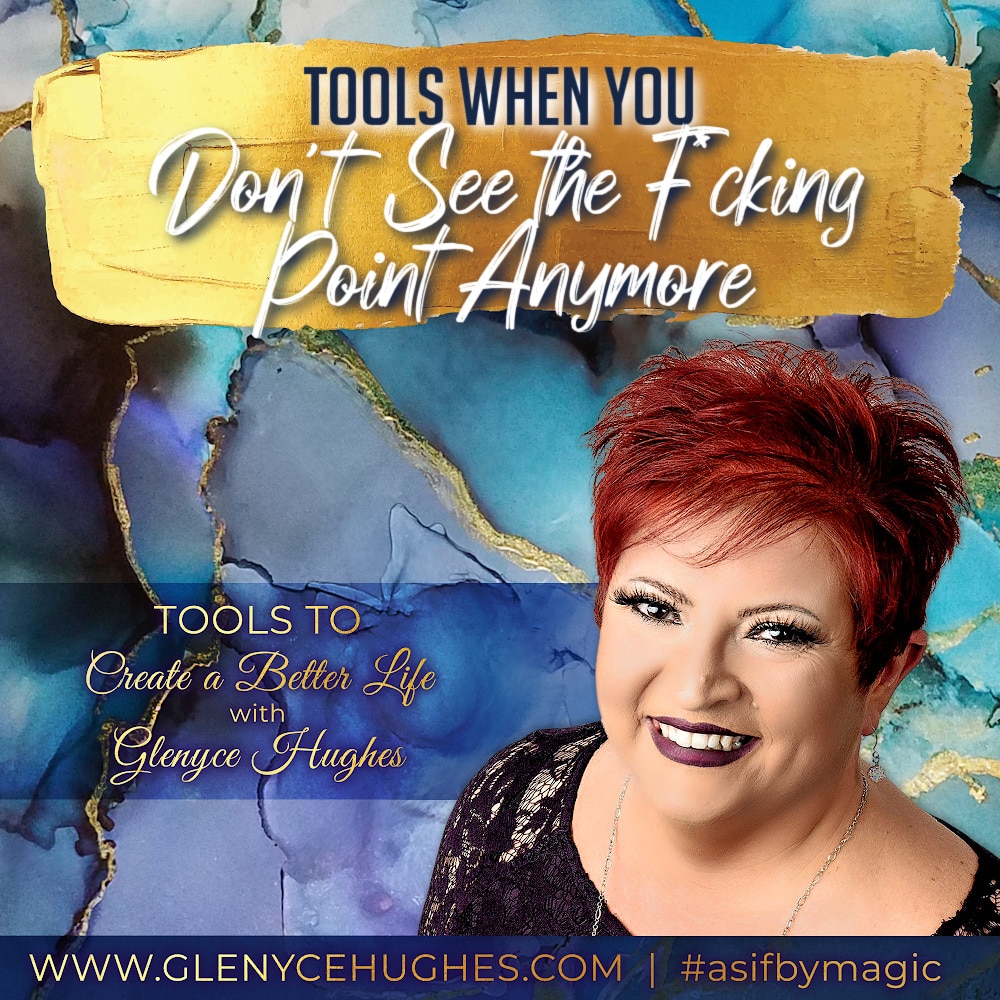 Be the magic you truly be.

If you’re in that space where you just can’t help but wonder what the f*ck’s the point to it all, you are not alone. In this episode, I will share with you some of the magical tools from Access Consciousness that can help you change that! We are potent creators of magnitude after all – it’s time to be creating the reality we’ve always known possible for us!

[00:00:00] Hello, and welcome to Tools to Create a Better Life with myself, Glenyce Hughes. Thank you so much for being here. I am so incredibly grateful for you.

I am in the city of Calgary right now. You would not believe that. This is such an amazing space. We’re here for the 3-Day Body Process Class with Kalpana. Oh, my goodness! How does it get any more beautiful than this?

[00:00:22] Tools When You Don’t See the Fucking Point Anymore. Yes. This is inspired by the Roe vs. Wade being overturned and my own process through this. Yes, I am Canadian. Yes, I live in Canada. Yes, that is something that went on in the US. I am a person, and I’m not stupid. I know that this will potentially impact us Canadians and everyone.

[00:01:18] Now, the first one is one that you may ignore or you may not even want to acknowledge, but it’s all about your potency. This is something that I would say has been a huge tripping point for myself because I didn’t acknowledge it as potency.

Growing up, I was often called “angry,” or told I was angry and I shouldn’t be angry. “Good girls aren’t angry.” And so, I had a lot of really mixed messages that I was angry, [which] was (1) big lie, and (2) that I shouldn’t be that energy was another huge lie.

[00:02:38] Often why we’re told not to be angry is because they don’t want that capacity. They don’t want us to be that—THAT. And so as an adult, I mean, nearing few months from 50, I’ve really started to expand into that energy because no matter what, for all these years, I’ve made it bad and wrong and all the things. It’s still there. It still comes up, especially in situations like what’s going on in the US with that and many things in Canada, too. Believe me, this is not just a US thing. But all these things that this energy that comes up.

Often, what I do—the autoresponder to it is to judge me, and then judge whatever the situation is. That only distracts us from actually creating greater. That’s all we’re doing with that.

[00:03:36] So really, if this reads for you, if you know this is you, please start looking at that. Please look at how much you’re distracting yourself with the thing or with the upset rather than going, “All right, how much more of me can I be right now? How much more potent can I be right now?” Instead of contracting it and dulling it down, expand it and expand it and be it.

[00:04:30] It’s just that so many of us have really bought the lie that that is wrong and bad and we shouldn’t, and people have told us that and we’ve had experiences and all the things, but what if we let that the fuck go? What if our question — and this is another great tool with something like this going on. Actually, this is a great tool every day, to be honest. It’s Who am I today? and What grand and glorious adventures am I going to have?

[00:05:22] Looking at the what you might call anger and all that energy that comes up when you’re in that space of, like, what the fuck’s the point, and then looking at, “Okay, well, who am I today? Am I the person who handled it like that, or who would I like to be today?

Now, I don’t say that so that we make it right. I will never make this right, but it will give us more space. Ultimately, if you’re looking to change anything, whether it’s something that’s a global thing or it’s something in your own personal life or whatever, it starts with more space.

[00:06:24] Now, here’s a question. Please write this down. Put it on your Reminder app. What can I be and do different today to change this?

[00:06:35] Again, going back to the first part I was talking about, we often put our creative energy into “this is wrong” and “this is bad” and “it shouldn’t happen.” We phone our friends, or we make videos about it, or we go on TikTok or whatever. We find all the people to align and agree with us or the other way – “This is good! This is the best thing ever,” and we do the same thing.

What if instead, we start asking, “What can I be and do different to change this?”

That is where a lot of the energies behind all of this crap that’s going on, all of this shit that’s going on. That’s where those energies want you to be because the more that you believe you’re a victim, the more that you play the victim, guess what? The more victim you will be. That’s where they would like you. They want you in that pathetic place, because then, they have control.

The more that you’re willing to ask Who am I today? Who am I today and what grand and glorious adventure am I gonna have? and What can I be and do different to change this, that is being the creator of your life and your living. That is being the magic and the miracle that changes what we know doesn’t create greater on the planet. Yeah.

Everything that brings up, will you destroy and uncreate it all? Right, wrong, good, bad, all-9, POD, POC, shorts, boys, POVADs and beyonds.

That is the Clearing Statement from Access Consciousness®. You can go to www.theclearingstatement.com for more information about how it works.

[00:09:40] Thank you so much for being here, guys. I’m so incredibly grateful that you are on this journey with me, and I wonder what the fuck else is possible now? I look forward to chatting again next week.

[AUDIO] The Question that Invited Me from Pathetic to Potent

[AUDIO] Tools to Choose Beyond Doubt

[AUDIO] BEing a Miracle Instead of Expecting One

[AUDIO] Tools When Life is Heavy