Debrief of My Beta Coaching Program 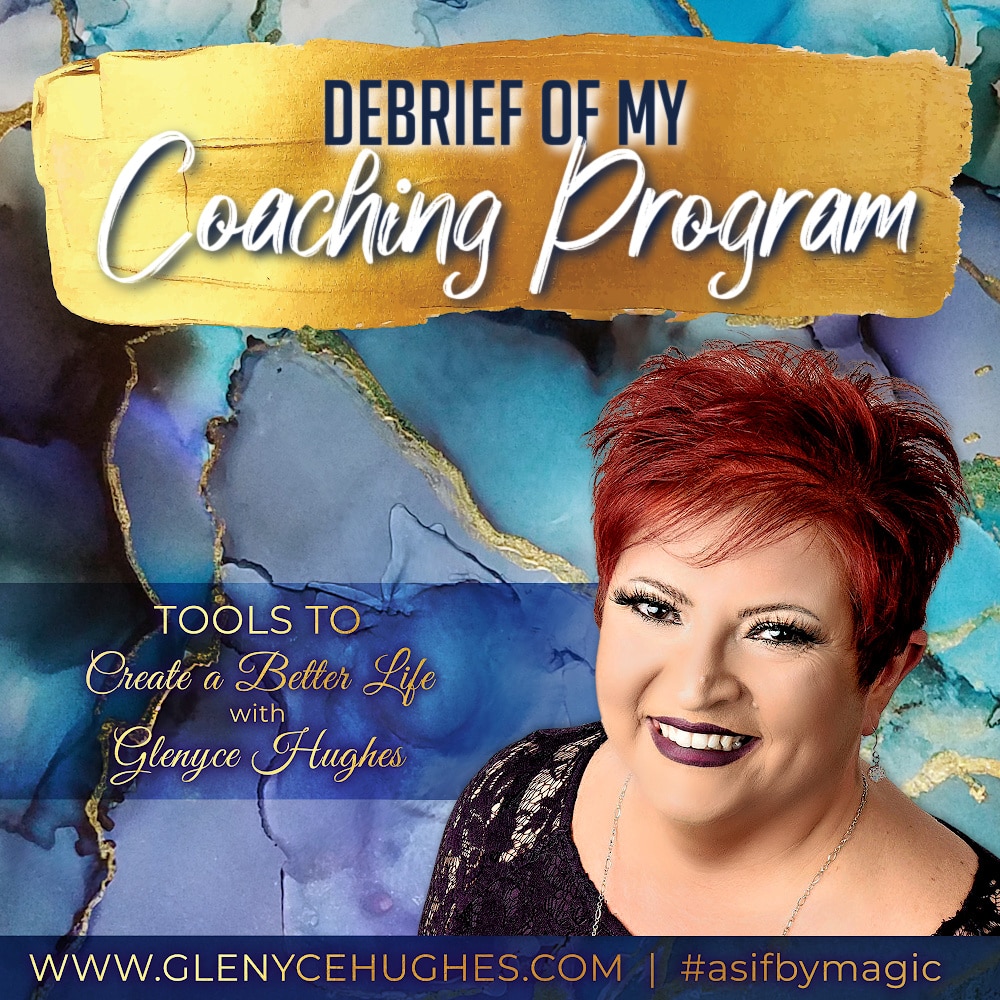 I wonder what magic will be possible now…

In this week’s episode, we will talk about the beta run of my one-to-one coaching program called “Beyond What You Desire #asifbymagic” and everything it entails: all the pieces needed in its 5-week sessions, the changes we were required to make, and reviews from clients who took part in the beta run.

[00:00:00] Hello and welcome to Tools to Create a Better Life with myself, Glenyce Hughes. Thank you so much for being here. I am so incredibly grateful for you.

[00:00:11] Happy 2023! I had taken the month of December off from these podcasts, and I’m grateful to be back with a little bit of a different show. Yeah. I am gonna do a debrief of my recent Beta Coaching Program.

[00:00:27] Back in October, I launched a program called “Beyond What You Desire.” It’s a 5-week one-to-one coaching program, and it was a beta. I really just wanted to see what we might be able to create with this and how it worked was—well, how it works. I’m not talking like it’s past tense. It’s still working. We’re still creating with it, it’s just the beta part is over. We know now exactly what’s required and have made some changes.

[00:00:57] How it works is there’s five different weeks, five different sessions that we do. This program was about one specific ask, which was part of the reason I wanted to do it as a beta program, so I really wanted to see it. It had some form and structure to it, so I just really wanted to see. But it was about one specific ask or one area that they had an ask in.

[00:01:44] So, I’m doing it a little bit different. When we talk about clarity, I let them know that we’re doing it that way. They might have had some specifics and that’s cool, and it was really more about energy.

[00:01:55] The other thing that I let them know is that we’re looking at it from, here’s our ask beyond what is possible, beyond what we desire. That was really the energetic invitation. “Here’s what I’d like and universe, show me what’s beyond this. Show me what is possible with this that I’ve never even considered.” That was the first session for 30 minutes.

[00:02:38] Then on the third week, it’s a 15-minute session. What we did was we did an energetic exercise, and that is really about exponentially the energy around the ask. What I suggested is that they listen to it at least once a day audibly. If they wanted to play it while they slept or anything, that’s fine, but at least sitting and listening to it audibly once a day.

[00:03:02] The fourth week was like the energetic exercise, except it was a clearing loop. All of these were personalized based on what they were asking for. I’ll talk more about that in a moment, but that was week four: another 15-minute session, personalized clearing loop.

[00:03:18] And then, week five was really just a touch in before we finished the program. Was there anything else they wanted to clear, or needed more clarity, or questions to ask or to celebrate? What actually was required?

[00:03:32] Now, I wanna go back in terms of what I was talking about with week three and four because it’s one of the things that, a few people in, I realized that was backwards. As I realized that, I started giving people choice or some of them I just said, “Hey, let’s do it this way,” meaning I did the clearing loop first in week three, and then we did the energetic exercise in week four. That just created a lot more of a flow than starting with the energetic exercise.

[00:04:03] For some of them, it was totally cool to start with the energetic exercise. But for the majority, doing the clearing loop first really created greater because what that is designed to do, of course, is to clear all the crazy, and then we step in with the energetic exercise and that opens all the doors, all the magic. What we started doing was changing that and that’s what we will do going forward. From now forward, that’s what we will do.

[00:04:32] Into specifics, into numbers. In October when I launched it, I said I’m gonna take 20 people because looking at a calendar, I was like, “Hmm, that’s 20 to 30-minute sessions a week, potentially.” Wow, that seemed like a lot. 10 hours of one-to-one sessions in a week along with all the other magic I create. Those filled up quite quickly.

[00:04:56] What was super cool is that when I looked at my calendar, it wasn’t actually intense. I opened the door to another 10, which filled up really quickly. So, I had 30 people go through the program. I just had the last person finish up. We started in October. We had people in November join. I believe one or two in early December, so that we finished in early January.

[00:05:48] Overall, I am so incredibly thrilled with this program. What it created for people, what people were able to create and clear and choose, it continues to blow my mind. It’s just… wow. It’s just… wow. I have to say when we’re willing to follow the energy, even though, and I should say this, in October, I was in England.

[00:06:14] I was in England for the month. When this creation came, what I call “knocking on my door,” it was like, “Oh gosh, I don’t really have time to put this together.” Really, there wasn’t much to put together. Of course, Ericka, the magician that creates so much of the magic in my business, she’s able to do the graphic and all of that, and we’re able to get it up and going.

[00:06:39] A lot of times now when I have an idea, I’ll sometimes just put it out there and just see if people are interested first before we even do anything else. That has actually really contributed.

[00:06:52] I have a program — actually, not a program. It’s a call, a training we should call it, at the end of January, January 31, and it’s called “How to Get Paid to Create a Product.” if that’s of interest to you, you might wanna check that out. There’ll be a link above or below.

[00:07:08] If also creating one-to-one coaching programs is of interest to you, I also have that. Yes. We have starting next week, January 11th, I believe, or 10th, some time. It’s three days, three days consecutive, and it’s called “Create a Kick Ass One-to-one Coaching Program.“

[00:07:28] I’m gonna take people through what I did with creating this, the woo and the logic. The “woo” in terms of communing with the creation, asking questions, what questions to ask, all those things. But then also, , all the other pieces. It’s not just the idea, but it’s basically the idea all the way to launching it, to opening up.

[00:07:52] We’ve got reel suggestions, “reel” not “real” suggestions, but suggestions for reels and TikTok videos to invite people. There’s checklists. There’s spreadsheets. There’s all the things: Canva templates for the graphics for the events, all the things that you might need. If that’s of interest, check out the link above or below because it’s really was born from this whole beta program.

[00:08:19] I had Carrie, she’s a good friend of mine. She also does things in my business with me. I had her interview some of the people, and I’m gonna actually show you some of these short clips of what they have to say about the program:

[00:08:32] “After you’ve tried a lot of things for a lot of years, you sort of give it a try, but there’s part of you that just doesn’t really believe that something’s gonna happen. But there’s something about Glenyce that makes you know anything is possible and it’s such a gift.”

[00:08:46] “I would describe it as a very intimate, one-on-one coaching program where your coach was actually listening to you, taylor-making the content around your concerns.”

[00:09:00] “I basically told her I just wanted to chop away with all the walls, barriers, anything in the way of just having a bigger, greater life. We got to that target and so much more.”

[00:09:12] “Glenyce provides a really safe space for you to get very vulnerable. I got a lot of clarity. Glenyce is really great at leaving you with the experience of being gotten.”

[00:09:26] Seriously, how does it get any better than that? I am so incredibly grateful for how this program turned out and the contribution it was to so many.

[00:09:38] If you’re interested, come on over. We can do the coaching. It is actually still at less of a price. I’ve got it down for the new year so check that out. Again, link is above or below. If you don’t see any of the links that I talk about, please let me know and I will get it for you.

[00:10:14] I’m so grateful that you are here and have a great week. I look forward to chatting again next week.

Beyond What You Desire #asifbymagic | 1-1 Coaching

How to Get Paid to Create a Product