Magic with Revenue and Creation Streams 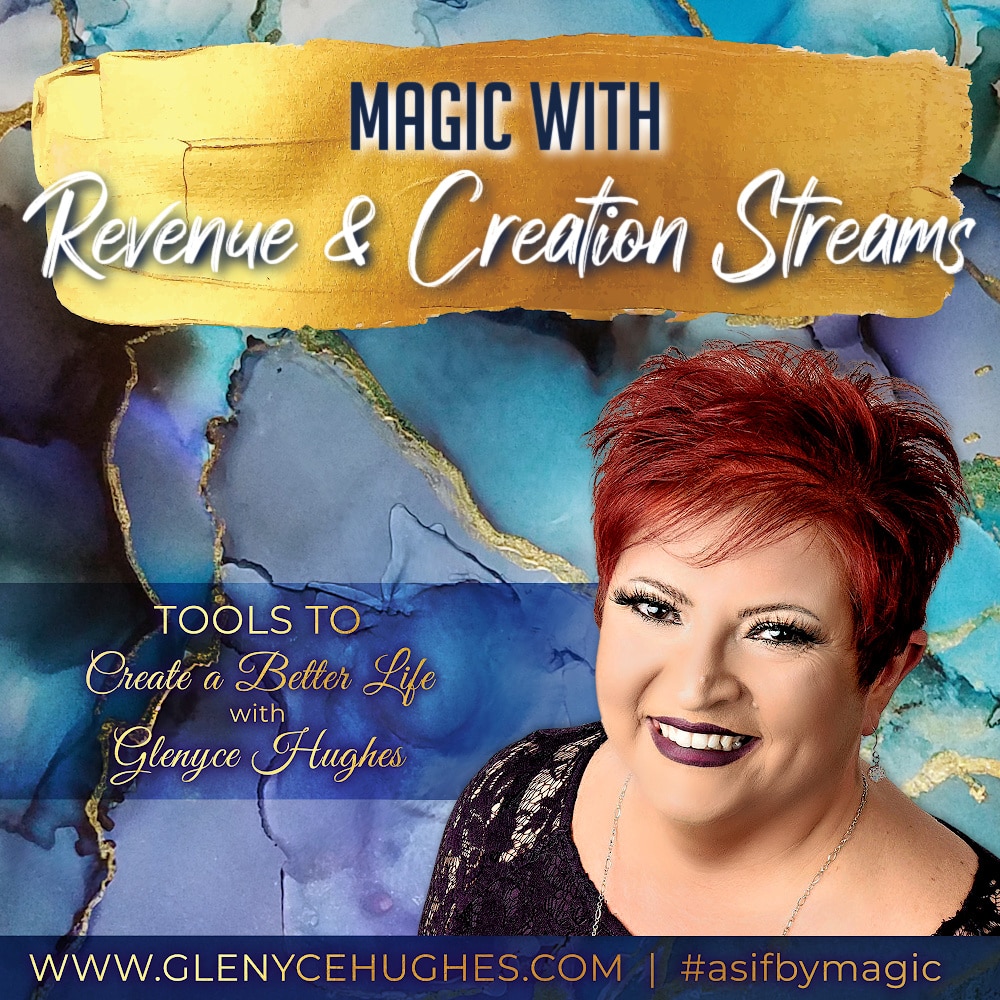 Lots of revenue and creation streams are wanting to contribute to you – now is the time we acknowledgize them! Of course, with the help of these phenomenal tools from Access Consciousness®, who knows how many revenue and creations streams you can start adding to your life!

[00:00:00] Hello and welcome to Tools to Create a Better Life with myself, Glenyce Hughes. Thank you so much for being here. I am so incredibly grateful for each and every one of you.

[00:00:12] Magic with Revenue and Creation Streams. Yes. Now, you may never have heard of creation streams before, so we will get there. But first I do want to talk about revenue streams.

[00:00:27] This is from the Business Done Different Manual, one of the classes from Joy of Business. I recently became a Certified Facilitator with it and it is one of my revenue streams. How the heck did I get so lucky?

There’s a whole section about revenue streams and creation streams, and a whole bunch of clearings. I am not going to go through them all on this show.

[00:00:51] Get your butt to a Business Done Different class! Come on over. I would love to have you. I have one coming up on October 28th, 29th, and 30th. You can either join us in London, England in person, or you can join us online. Either way, I would love to share these magical tools with you.

“What is a revenue stream? Is each project class, product, service a revenue stream? Yes, and it’s not just how much money you receive. Revenue streams are also the contacts you create, the energy, the consciousness that’s created with a project or a class. What does your product or service create in someone else’s life? Is that a revenue stream?”

[00:01:39] It really is about not limiting what a revenue stream is and looking at how many revenue streams you have that maybe you haven’t even acknowledged.

[00:01:49] I was listening to a call with Christopher Hughes. No relation, although we are both from Saskatchewan, Canada. He was talking on there about your mortgage being a revenue stream, and I’d never considered that before and just went, “Whoa.” Totally. Totally!

So, how many revenue streams do you have that you’ve never acknowledged? Right, wrong, good, bad, all-9, POD, POC, shorts, boys, POVADs, and beyonds.®

But basically, as we talk about things like this and things get clunky and weird and all that, we run that and it starts to clear it so that we have more choice, we have more awareness, we have more possibilities, which is really what we’re asking for.

Everything that is, will you destroy and uncreate it all times a godzillion? Right, wrong, good, bad, all-9, POD, POC, shorts, boys, POVADs, and beyonds.®

[00:03:14] What if it doesn’t have to be? Look at your mortgage if you have a mortgage. If you don’t, that’s fine. But look at something that you do know is a revenue stream and one that maybe isn’t hard work. My mortgage is not hard work. It’s just something that we pay every month, twice a month actually – we pay biweekly, and have done for years and years and years. How does that get any better than that?

[00:03:47] A few years ago, I created these cups. Well, actually, I can’t say I did. The magician that works in my business, Ericka is her name, she’s amazing. I gave her the words and she did the design. And then, I put it on with a company online. Basically, people can just go and order and I don’t do anything except enjoy the money that comes in other than, you know, what we did at the beginning.

[00:04:16] This is a revenue stream. Something that took some work to begin with to get it set up, to figure out the words, make sure I wasn’t copyrighting anybody’s stuff and then, Ericka putting it together and designing it, and then finding the company that was, you know, to work with and all of that. Now, it just continuously generates money. How the heck does it get any better than that?

[00:04:43] Now, I don’t have just one cup on there. There’s multiple cups. Some cups haven’t generated any money whatsoever. Nobody’s purchased them. Some like this one, there’s been many purchases of, probably because it’s so fun to say. None of that’s relevant.

[00:04:59] It’s not like I have to have the money come in from these cups or from even this book. I have spoke about it before. I will continue to speak about it. It’s called the Rocketbook Fusion. We’ll put a link above or below. This is a revenue stream for me. The link that I share is something called an “affiliate link”, meaning that I get a percentage when people use my link to purchase this book.

[00:05:46] This book I recently got, and I have probably saved a thousand trees. Okay, that might be an exaggeration, but I’m a writer. I’m constantly jotting things down. Before, I just always had paper and I would jot down, and then when I was done with it, I’d usually fold it over and use it as much as I could, but it would always get burnt. We burn our paper here at the acreage.

[00:06:08] This book, literally, guys, I have my action list. I write it down. I scratch out as I do it. Then when I want to start a new one, ’cause I like things looking fresh, I just go to a different page. I start it and then I can wipe this off with a little bit of water in the cloth. I love this. I have recently ordered the markers or the colored pens that goes with it. So, just another revenue stream.

What energy, space, consciousness, and choice can you and your body be that would allow you to be the revenue creations beyond anything you’ve ever imagined? Anything that doesn’t allow that, will you destroy and uncreate it all times a godzillion? Right, wrong, good, bad, all-9, POD, POC, shorts, boys, POVADs, and beyonds.®

[00:07:31] I usually ask the universe. Universe, can you bring me profitable revenue streams today that would be fun for me?

[00:07:41] One, I’m really only interested in profitable revenue streams for the most part—we’ll talk about another aspect to that in a moment—and that are fun for me. If they aren’t fun for me, I won’t do them. This is one thing I know about myself.

[00:07:55] With that, let’s actually talk about creation stream. This is the other section in the manual.

“Revenue streams make you money. Creation streams may be contributing something else. Some projects don’t create money, but they maybe increase consciousness in the world and are therefore valued. When you have a creation stream, ask: What revenue stream can support this creation?”

[00:08:25] When I very first started traveling around the world with the classes that I was facilitating and such, there were a lot of those classes that were creation streams. They were not revenue streams. By the time we paid for the expenses of the travel and all the pieces, it didn’t generate money.

[00:08:45] There wasn’t money at the end of it, and there were so much creation as part of it. There were people then that became a part of my world that maybe assisted with other classes, or maybe they joined other classes of mine and such, so they were creation streams.

[00:09:00] Now, I didn’t do a very good job of asking what revenue stream can support this creation. However, on some level I was asking that because what I do and still do to this day, although for the past couple years I haven’t traveled nearly as much—well, barely traveled, let’s say, although that’s changing.

[00:09:19] Come and play somewhere in England. We’ve got the Tour of England going on. You’ll find a link above or below, and other creations in the works like Dubai, Florida, Arizona, Las Vegas, France, and all the other places. Things are in the works.

[00:09:37] What I did, without even really realizing it or not necessarily on purpose, was that I created an online business that was more of the revenue stream that supported the creation streams that were the classes that didn’t balance out at the end of the money but did create so much more.

[00:10:55] I recently had a creation team meeting with all the hosts for England and they ask the usual question of, “Okay, well how many people do you need in each class?” I’ve tried that. I’ve tried that. I just don’t find it works, and I wonder, I wonder what else is possible.

[00:11:17] If that works for you and your business, please keep doing it. It isn’t about changing it, but it is about looking at what would I like to create here? Some of the things that we put into the world are not about creating money from it, and many will be and some won’t be. This is where this question – what revenue stream can I support with this creation?

[00:11:48] Luckily, I was just having so much fun back then with all the travel and all of that it was creating. There was a lot of money being created just in different ways. But if I’d had done it—if I had sat down with an accountant probably that doesn’t know this stuff, they probably would’ve told me, “Don’t travel anymore. What are you doing? Stay at home. Look at all the money, the profit, from this” and… what if? What if it’s okay?

[00:12:32] Now, if you are interested, I have a free gift for you. It is called the Ultimate Confidence in Business Guidebook. I share five different weird tools, of course, that will allow you to be the confidence in your business and really create profit so that you can be the profit, you can be the revenue streams, and you can really recognize and acknowledgize all of the creation streams and revenue streams that are there. Go and check that out. Link is above or below. If you don’t see it, reach out and I will get it.

[00:13:07] I wonder how many creation and revenue streams you can add today that you’ve never even considered? Thank you so much for being here, guys. I look forward to chatting again next week.

[RADIO SHOW] Behind the Scenes of Creating My Magical Life