What I Have Learned So Far on My Tour of England 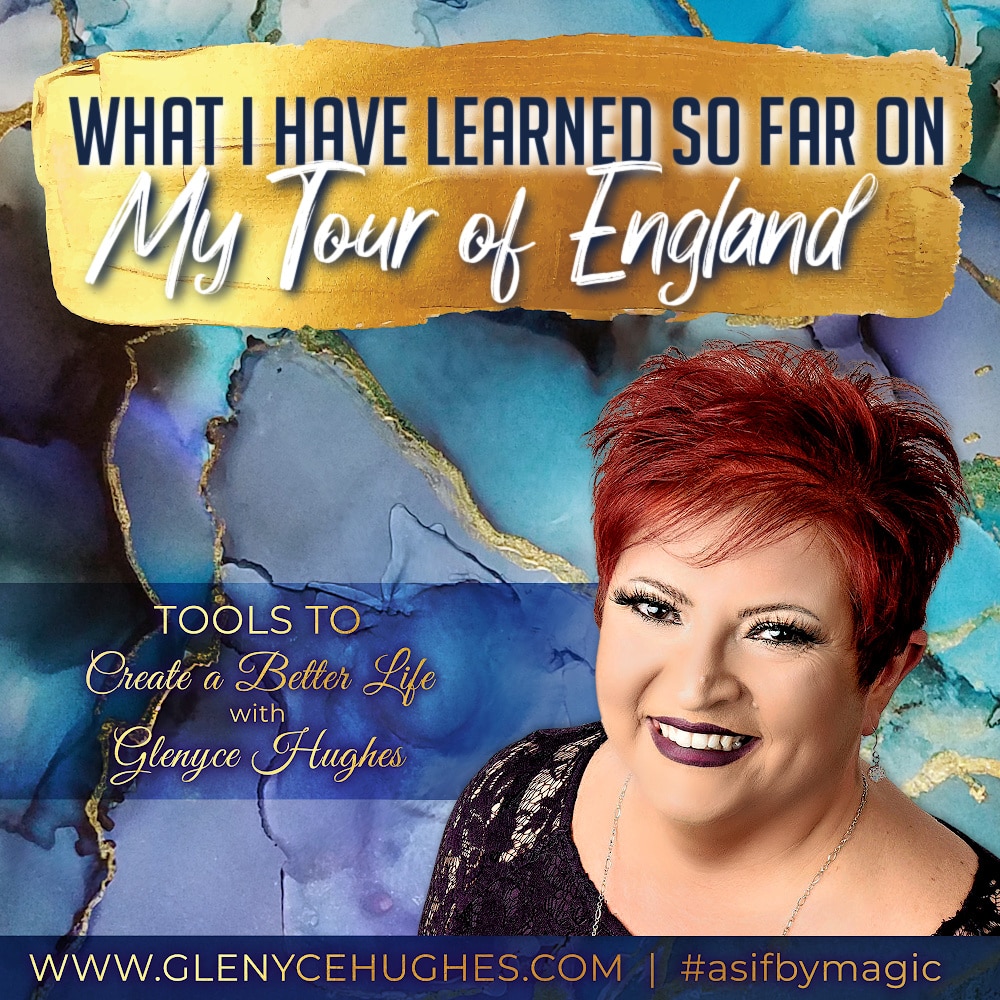 This truly changes everything.

Hubby and I finally traveled out of the country for the first time in 3 years – HDGIABTT?! It has been such an adventure so far, but of course, there’s always gonna be “bumps” along the way. In this episode, I’ll be sharing what I’ve come to realize during those times, and how it contributed more magic to our awesome, AWEsome trip!

[00:00:00] Hello and welcome to Tools to Create a Better Life  with myself, Glenyce Hughes. Thank you so much for being here. I am so incredibly grateful for you.

[00:00:10] Now, if you’re watching this via video, you will see beautiful ocean waves behind me. If you’re listening to this, you’ll probably hear them. I didn’t check, but I’m pretty sure you could hear them. This is the Bristol Channel. I am in Esplanade, Porthcawl. I’m not sure how to say it. It is a beautiful part of Wales. Just over there is Cornwall, so this is England, and… yeah.

[00:00:43] We have been having such an adventure here in the last, gosh, I think 10 or 11 or 12 days? I’m not even sure how many days that I’ve been here. We started up in, well, we landed in London and then we went up to Newcastle, which is north England on the East coast. And then [we] went to Liverpool, which is on the West Coast, and then drove down through Wales. It’s just so beautiful here, guys. If you ever have the desire and the chance, come and check it out.

[00:01:18] What have I learned so far on this #asifbymagic Tour of England? Now, some of you may know that I haven’t traveled for about three years. It’s been a while since I’ve got on an airplane and packed and done all the things. This is almost feeling like it’s brand new.

Saying that 10 times in the morning and 10 times at night, and any time throughout the day when you’re not choosing it, it can change everything. It’s so incredible.

[00:02:23] I didn’t actually really realize how much of a choice it was until this trip. This trip has been amazing, and there has been times and places and spaces, like when we got to London… I should back up a little bit.

[00:02:43] One, we had no official plans of where we were going to stay. We landed September 30th. We knew October 1st was a train strike. Our plan, initially, was to get to London and then on the next day, take the train up to Newcastle. We knew they were gonna have a strike so we thought, “Okay, well, we’ll figure it out when we get there.”

[00:03:14] What we did was we went to the train station, Victoria Train Station, from the airport and then just went, “All right. Well, let’s find a hotel,” and found one fairly close. The thing is, and I mean, we’ve stayed in London many times, this is not new to me, but holy hell, my sweet friends. It was the smallest room that I think I’ve ever stayed in with two large suitcases.

I do have it on my photos on Facebook, so we’ll put a link somewhere so you can check them out.

[00:04:48] I couldn’t change the room. What could I change was basically to choose ease, joy, and glory. It’s like, “Okay,” and Hubby was super tired, so he just basically laid down on the bed and went to sleep. It was about three in the afternoon, local times. I went down to the lobby. They had a nice big lobby, so I went down to the lobby for, I don’t know, three or four hours and just did computer stuff and such and just chose ease, joy, and glory.

[00:05:17] It wasn’t a force. That was the really cool thing. I wasn’t having to force myself to choose it. It was recognizing when I wasn’t, and then choosing something different.

[00:05:27] I’m just checking the water. It’s getting in a little close here, so just checking, you know? I don’t really wanna be getting wet. All right.

[00:05:54] I know it might sound really bizarre, especially if some of you have got this before, I really did not realize how much of a choice it was. You guys know, I’ve been playing with these tools for 11 years. I have been choosing ease, joy, and glory and not getting wet. Okay.

[00:06:24] I invite you to come play. I still have the #asifbymagic Tour of England going on. We’ve got two classes coming up in Margate, Kent, and then of course, two evening classes in London, and then the Business Done Differents. So, come and play. I would so love to hug you or have you online. All the classes are available online, too. So, hope to see you soon!

[00:06:51] That’s really the biggest thing that I would’ve learned so far on this whole trip is the choice of ease, joy, and glory. The other thing that I learned, which I’m not sure that I really actually was aware of for myself, but how much I decided what good was and what bad was and what right was and what wrong was. The amount of judgment, I guess, is probably the best way to put it, that I had of when things went the way that I thought they should, compared to when things just went, you know?

[00:07:50] And so really looking at it from a whole different space of what if that’s not what it needs to be? What if that’s not the, say, the magic? But because it was, in a sense, what I’d already decided it should be, then it would’ve been magical if that would’ve occurred. And because it didn’t occur, it wasn’t magical.

[00:08:14] Hopefully, I’m making sense, guys. But it was just this huge awareness that the magic isn’t in getting what you think you want. The magic is in the ability to choose ease, joy, and glory no matter what shows up. That, to me, is where the magic is now.

[00:08:36] Again, this is so new to me and I didn’t realize how much control I used. I’m checking the water again. Okay, I think we’re good. How much control I used for things to turn out the way that I thought that they should and that was the right way, that was the good way, and if they didn’t go that way, that was bad and wrong. I had no clue how much I was doing that and how detrimental really it is to truly living.

[00:09:08] I say detrimental because again, the control, like how much control I had to use to force, to push, to make things occur and call that magic. Hmm hmm. And yet, now, at least today, I can really get the energy of the magic being the ability to choose.

[00:09:37] You know, this is something that Gary Douglas, the founder of Access Consciousness®, he defines magic as your ability to change or choose something different that changes something, basically. That’s it. The willingness to choose ease, joy, and glory, that is magic. When you’re standing in a hotel room that you can’t even turn around in when you’re both standing up in, the ability to choose ease is huge.

[00:10:06] And so the next day, we chose to go to Newcastle. Since the trains weren’t running, we’re like, “Okay, you know what? We’re gonna just take a coach.” That’s a whole different experience. We changed coach in Leeds, and then we arrived there.

[00:10:41] And again, it was just the choice of ease. There would’ve been a time I would’ve absolutely had a hissy fit. Now, maybe not outwardly. I would never probably, well, I shouldn’t say never, but probably never go up to a train or a coach driver and freak out on him because the coach was delayed. That’s not really what I would do. But in my head, or maybe to Hubby, that’s what I would do.

[00:11:07] It was like, ‘Okay, so it’s delayed. All right.” I did look at what else was possible. I looked at, “Okay, do we just get a hotel here in Leeds and take the rest of the journey the next day? Do we rent a car in Leeds and drive ourself to Newcastle?”

[00:11:23] I looked at all the possibilities and the only one that felt yummy and expansive was to stay and wait. It was. It was awesome. It was a whole different experience than I would normally choose, and it was really, really cool. We got to see lots of interesting people in Leeds on a Saturday night. Lot of interesting stuff going on. And it was ease ’cause I chose it to be ease.

[00:11:52] I know I keep saying that, but honestly, if you can get that… if you can get that you always have another choice, that can change everything. In a lot of different business modality, stuff like that, people will say, you know, what’s your “why”? I’m not necessarily big on what’s your “why” ’cause it takes a lot of definition. When I look at what I do and why I do what I do, that’s it – so that every person can always know there’s always another possibility.

[00:12:33] Every person that would like to know: there’s always another possibility. Many people aren’t interested in knowing that, but for the people who would like to know, that’s what these videos are for. That’s what these radio shows are for. That’s what every class I put on is for. It’s so every person can know there’s always another possibility.

[00:12:51] This is huge, for me personally. This is huge to recognize. There truly is always another possibility with ease, no matter what’s going on.

[RADIO SHOW] Tools to Get Out of Control

[RADIO SHOW] All of Life Comes to Me with Ease, Joy & Glory®